Just got back from a great weekend on Mackinac Island for an intense workshop that served as my introduction to the Society of Children's Book Writers and Illustrators. There were maybe 90 attendees at this Michigan chapter event, with a small percentage of those being illustrators. Matt Faulkner, children's book author and illustrator was our fearless leader. Matt did a very clear job of explaining the process of producing a series of images for a typical children's picture book PLUS he explained and demoed his method of warm/cool painting. Awesome weekend!
Below is the painting produced for the exercise, my first time using watercolor in 25 years!
The short story was about a little boy who's convinced his piano teacher is from another planet. She's just too NICE. He makes a case to his parents and the police; all the phenomena he observed were explained away and his theory was disproved. But in the end, we find out that Mrs. Bailey really IS an alien. In fact, she is in cahoots with the police chief, who is also an alien. 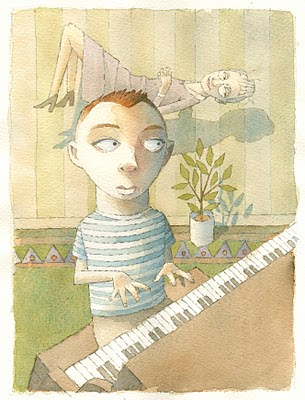 Posted by Cathy Gendron at 4:47 PM No comments:

I'm savoring the memories of this past summer before heading into a major commission deadline crunch. These sketches are from a trip to the North Channel in August. Peaceful, relatively unspoiled and incredibly beautiful, the landscape is glacially carved and covered with pines, maples, birches and...wild blueberries! Lovely. Plus we passed right by a mother black bear and her two cubs, swimming across probably a 5-mile wide channel! 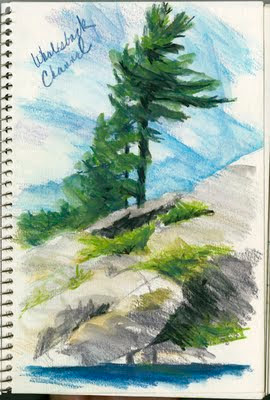 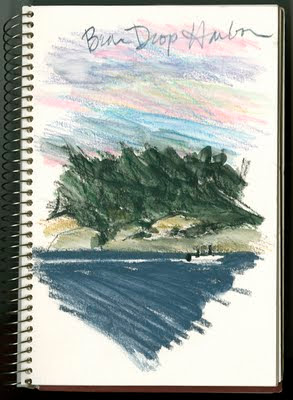 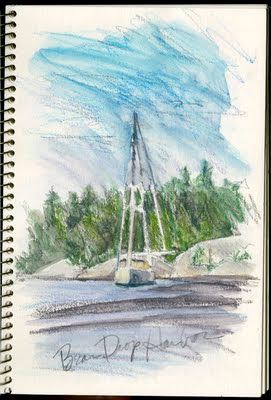 Posted by Cathy Gendron at 2:30 PM No comments:

And then there was Bali

Beautiful, spiritual, incredibly crowded. The people of Bali were the highlight. There really must be something to the Hindu culture that dominates the country. 93% of Balinese people follow Hinduism. The downside is their population explosion and with it all the traffic plus the inadequate sanitation and sewage treatment. Construction everywhere. 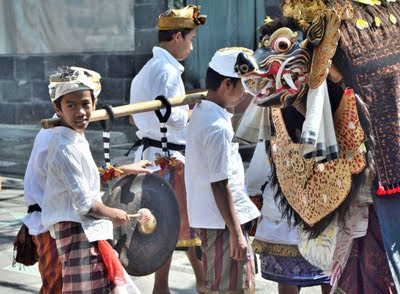 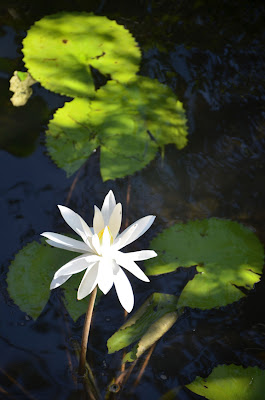 Posted by Cathy Gendron at 11:40 AM No comments:


Just savoring the summer. A few more pictures of the Australia/Bali trip.

Posted by Cathy Gendron at 11:09 AM No comments: